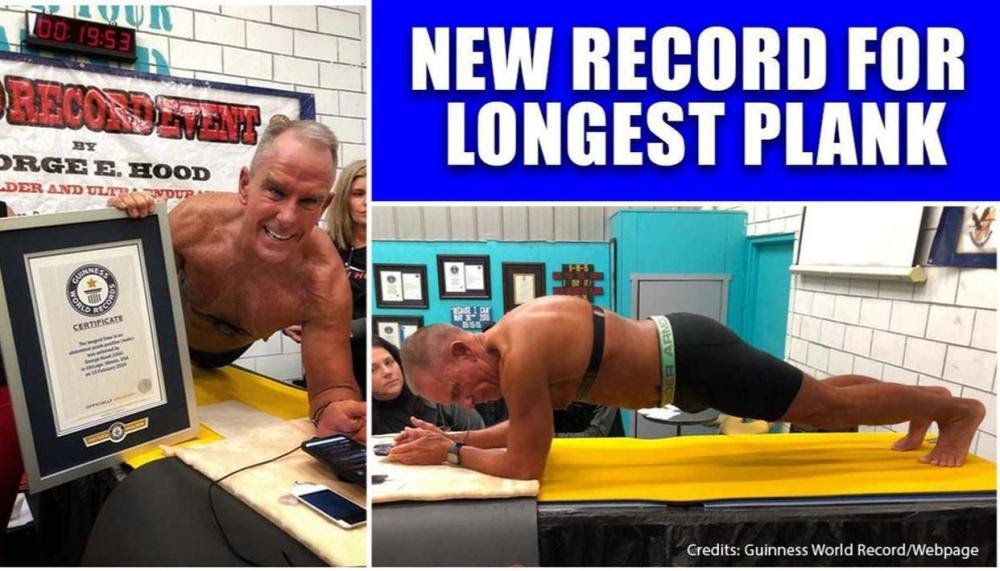 A former US Marine has achieved the Guinness World Record for the longest plank ever, completing the challenge in eight hours, 15 minutes and 15 seconds!!!

For George Hood, who previously worked as a supervisory special agent at the Drug Enforcement Administration, this is not the first time he has achieved a world record for an incredible fitness-based feat.

In 2013, Hood set the record for the longest abdominal plank in three hours, seven minutes and 15 seconds.

However, three years later he was defeated in another planking world record attempt, beaten by Mao Weidong of Beijing who managed to obtain the record in eight hours and one minute.

At the age of 62, Hood is once again the world record holder, having carried out his latest attempt in Chicago, Illinois.

However, he still found enough energy after breaking the world record to do 75 celebratory push ups!

Hood’s longest planking time is actually two hours longer than his record, having lasted for 10 hours and 10 minutes during a 2018 practise attempt.

WHAT ARE THE 4 MAIN BENEFITS OF THE PLANK EXERCISE?

Planks alone won’t give you a six pack, but when paired with a quality diet and total-body cardio and strength exercises, planks do help you develop definition in your middle.
They train the inner core muscles, including the transverses abdominis, which lays the foundation for creating a stronger, more defined rectus abdominis — the front sheath of abs that you see in the mirror. For people with disc issues or existing back pain, planks are safer than crunches because they don’t require flexion of the spine.

Planks create a functional midsection because they work your entire core, which encompasses the whole trunk from the pelvic girdle to the shoulder girdle. When these muscles, which include the erector spinae, rhomboids and trapezius, are strong, you’ll naturally stand up straighter.
Good posture means you’re keeping your bones in proper alignment, facilitating breathing and nervous system function. It also promotes proper positioning and, therefore, operation of your internal organs — including those used for digestion.
Additionally, good posture lengthens you out so you look thinner and taller, even without dropping an ounce on the scale. Standing up tall also makes you appear more confident and allows you to show off all that work you do in the gym.

3) They Help Reduce Back Pain

Better posture helps you reap another of the plank’s benefits: improved back health. From a practical point of view, good posture helps keep the vertebrae and ligaments of the spine healthy and aligned.
Planks train the muscles of your abdomen to activate so they support your posture and share in the burden of holding you upright; your back muscles no longer have to do all the work. This also deters the development of degenerative osteoarthritis and the associated immobility that occurs with time.
When your abs are stronger and you sit up tall with your vertebrae stacked, as your body is designed, you’re also less likely to develop pain in your neck and shoulders caused from slouching in abnormal positions.

The plank position, and all its variations, train the body to use the abdominals for stabilisation — which is what they’re designed to do.
When you run, walk, cycle or swim, the strong abs you’ve developed from planks mean that you’re more efficient overall. Your legs and arms don’t have to do all the work, so you can last longer and resist injury from overuse of one muscle group.

Because the plank strengthens all of your core, not just your abdominals, it teaches your body to act as a unit, not as an assemblage of individual parts. Planks train your body’s muscles to work together, while plank variations, such as one-armed or one-legged versions, hone balance.

See how long you can hold it for and let me know your longest times!

WHAT PEOPLE SAY ABOUT US

Check out what some people have said about us and our programmes below:

We are located at:

Check out what we have been up to recently through our Instagram.

Met this strongman legend today at the airport! @t

Massive shout out to one of our clients Scottie Tr

Chat?
We use cookies to ensure that we give you the best experience on our website. If you continue to use this site we will assume that you are happy with it.Ok